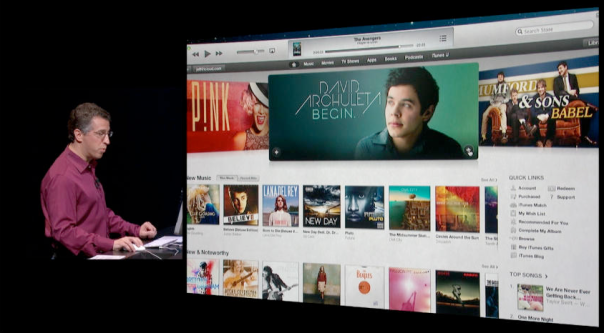 Nowadays, in our digital culture and information age, I have stopped believing in coincidences.

E.g. Apple reveals its latest iphone5 model, and right up there on display is a screen cap for David’s new BEGIN. album. Coincidence?

I think not! Somebody at Apple is an Archie! 😀 And for good measure, they gave David some expo, which sounds good to me!

In the world of new media, it’s always how you “FRAME” your story, and in this wonderfully timed framing, David was put out there along with an Apple product.

Unfortunately, not all “framings” are about spreading the good news and promoting some good music.  Unfortunately, other ideas are being “framed” to instigate protests, riots, and perhaps even a presidential election…

Which brings me to:

DO NOT FEED THE TROLLS! (IT’S WAR – INFORMATION STYLE)

Earlier this year, this year of presidential elections, an increased climate of racial intolerance had been exposed by our various social and mainstream media.

From the controversy over the Trayvon Martin case to issues over the casting of black actress Amandla Stenberg in The Hunger Games, it seemed that our millennial generation, who whooped and hollered over the election of President Obama in 2008, is not so progressive about race relations as we once thought.

Or, is it just that trolls have so successfully interfered with and derailed our public conversations that this social climate only appears to be more intolerant?

What is a troll? Someone who deliberately leaves hurtful, bigoted and deranged comments on blogs for the express purpose of derailing conversations, preventing fruitful dialogue and destroying people’s spirits through hate-mongering.

Some trolls are random, while some are actually recruited and paid for by certain political opponents (and perhaps even mega corporations).

When people in positions of power see how easy it is for folks to start a revolution through social media (see the Arab Spring and Occupy Wall Street) or even to raise the political conscience of the millennial generation of young people (see Kony 2012 or the Trayvon Martin protests), they need to find ways to quell, curb and contain efforts in sparking social change.

And trolls are not just on blogs: They are also in mainstream media. Some, quite frankly, are the media.

Ever wondered what happened to the Kony 2012 campaign? Nothing, it seems. All one needed to do to curb that enthusiasm was for a media troll like TMZ to post a humiliating You Tube video of Kony 2012 video maker Jason Russell ranting and raving in the nude on the streets. Kony 2012 (which I had issues with in its simplistic, neocolonial treatment of Ugandan politics and atrocities but was nonetheless excited by the way young people had responded to international human rights issues) immediately gave way to “Phony 2012.” That’s how a media troll can derail a movement (TMZ is part of that umbrella media conglomerate owned by Rupert Murdoch, whose journalists are presently on trial for illegal hacking).

Even in the realm of popular culture, popular blogs such as Jezebel and Huffington Post re-posted the tweets of racist trolls, who somehow had attacked the movie version of The Hunger Games for featuring a black female central character. Because of these Twitter Trolls, even mainstream blogs were “feeding” them by giving them more attention than they deserve. 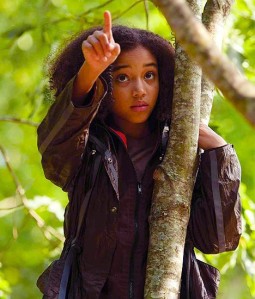 What’s amazing to me is how these blogs have missed the real news story, which is not that racist trolls tweeted against multiracial casting inThe Hunger Games but that so many of them did so in an organized and aggressive manner.  Who’s behind this organization? Are they “random” or “paid for,” and if they’re being paid, who’s doing the paying?

Come on, investigative journalists:  There’s a story there!

I, personally, don’t believe those Hunger Games “trolls” are  fans of the series or even apart of the young millennial generation.

Why do I believe this?

Because I regularly teach that generation and occasionally follow their popular culture.  This is a generation that grew up reading and watching the Harry Potter series, which routinely includes characters of color, and eagerly gobbled up all the High School Musical movies, known for their multiracial casting.

This generation also regularly watched movies in which black actors like Will Smith have portrayed “white” characters. Indeed, this young generation grew up on a steady diet of multiracial characters on the Disney and Nickelodeon channels.  In various movie fan forums and even on the Internet movie database, the Hunger Games fans have not expressed issues over the casting of black characters in the story.

And yet, popular blogs would have us believe that this generation would take issue and tweet racist epithets over the racial casting of a central character.

Absolute rubbish! And shame on Jezebel, Huffington Post, and other mainstream blogs for “feeding the trolls.”  Shame on CNN, MSNBC, NBC, ABC, and other major news networks for occasionally re-tweeting, re-posting, and giving credence to unconfirmed witnesses, unreliable sources, and uninformed gossip when covering the news.

Which brings me to this week’s latest in “disinformation”…

WHO’S BEHIND THE ANTI-MUSLIM YOUTUBE VIDEO THAT SPARKED PROTESTS IN THE MIDDLE EAST?

From the different reports I’ve read, this is the story I’ve gathered.

Sometime this year, a “Sam Bacile” signed up for an account on You Tube, and posted a video, “Innocence of Muslims,” described as a 14-minute “trailer” for a full-length movie that looks like a really crude piece of work, deliberately designed to offend practitioners of the faith.  It was uploaded since July of this year, yet somehow on the eve of September 11, a version of the video, dubbed in Arabic, managed to find its way to Egyptian TV.

On the 11th anniversary of September 11, protests erupted at American embassies in Cairo and later in Benghazi, Libya, where four Americans, including U.S. ambassador Chris Stevens, were killed in an attack.

In initial reports from the Associated Press and The Wall Street Journal, “Sam Bacile” was identified as an “Israeli-American real estate developer” who claimed that his low-budget film cost $5 million and was financed by “100 Jewish donors.”

RED FLAG ALERT: Why did such respectable journalists as the AP and WSJ not question this ridiculous claim before they spread the news? Now folks – even here in the U.S. – believe Israel had something to do with this garbage!

Naturally, as we have seen with the Gabby Douglas hair fiasco, news and misinformation travel like wildfire on the Internet, and even more so when the source cited are “credible” journal sources like AP and WSJ.

I am absolutely appalled that the B.S. radar of these journalists didn’t go off the charts! Even TMZ would have recognized that they were being fed crap (then again, when you’re a bottom feeder, would you just be more attuned to crap when you hear it?).

As it turns out, not only is this story about Sam Bacile completely untrue, but he has ties to a bunch of Christian fundamentalist groups (including that Q’uran-burning pastor in Florida) and, worse, a criminal record (arrested and serving jail time for meth cooking and identity theft). Of course, now that we know we’re dealing with criminally minded individuals, how do we even know this latest information is indeed correct?

I find I can’t trust anyone to do competent investigative journalism these days. The real person behind the shadowy “Sam Bacile” might be an Egyptian Coptic or newly converted to one of the fringe Christian supremacist groups, or (gasp!) may be apart of some Islamic extremist sleeper cell deliberately setting off a fuse in the Middle East to bring us to the brink of war (or, from a Christian fundie perspective, closer to Armageddon).

Or, heaven forbid, whoever funded the Arabic dubbing and then made it available to Middle Eastern television, may be some anonymous Super PAC donor who found a way to undermine Obama’s presidency during an election year, this after Obama received a bounce in the polls coming after the DNC last week.

As the Bard would say, therein lies the rub…

But far be it from me to contribute to this “Disinformation Age” and put out even more conspiracy theories. As the title of this post, which started off with some good David news, suggested: This is about FRAMING THE STORY. And just as with Apple’s inclusion of David’s BEGIN. image, I don’t believe in coincidences. 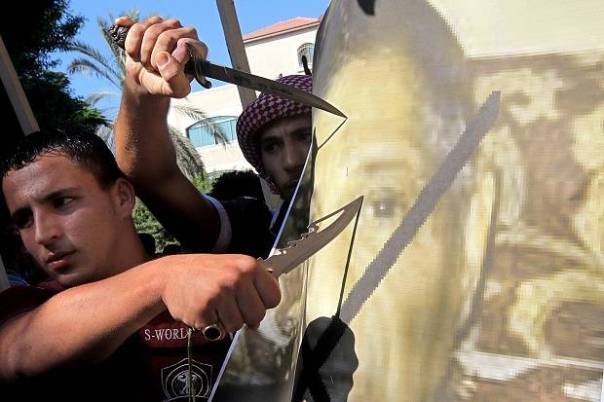 The story that is framed in the Middle East, which has set off growing protests in the region is this:

THE AMERICAN GOVERNMENT ALLOWED AN OFFENSIVE ANTI-MUSLIM VIDEO TO PLAY ON THE INTERNET.

Keep in mind: people who have existed in dictatorial regimes for so long do not understand how “Freedom of Speech” works or, for that matter, how a fringe group of haters, lunatics, and criminals can release a hate-filled video without censorship from our government. Nothing in dictatorial regimes ever gets released to the media without government approval.

The story that is framed here in the U.S. is as follows:

A STUPID VIDEO, NOT TO BE TAKEN SERIOUSLY IN THE SLIGHTEST, SET OFF A BUNCH OF KNUCKLEHEAD EXTREMISTS IN THE MIDDLE EAST.

Therefore, we believe, Muslims are “immature” and “easily offended” and “clearly not ready to live in a democratic society.” Or, worse, depending on your political persuasion, some conclude:

“This is proof that Obama, who is probably secretly Muslim anyway, should no longer be president since he clearly doesn’t know how to deal with such unreasonable people. Appeasement does not work, only wars and brute force are necessary to deal with such savage people.”

All the while, whoever is behind this dirty fiasco, has succeeded in destroying the peace and spreading the disinformation. Do I blame a film for the deaths of four Americans? No, I blame the murderers who did that.

What I blame the so-called filmmakers for are incitement to violence, hate speech, and fraud.

Whenever my students get visibly upset over conflicting reports and Internet rumors, I always tell them:

“Discern your information, and step away.  Respect your intellect, and preserve your spiritual health.”

This “Information Age” has evolved into an “Information War,” and the casualties could very well be our spirits and, as we’ve seen unfold this week, our very lives.

How do we protect our spirits, our lives, and our co-existence?

DO NOT FEED THE TROLLS!

That’s right, I’ve said it before on my blog and I’ll say it again: DO NOT FEED THE TROLLS!

This “Sam Bacile” is an Internet Troll, and he has set off global unrest just through Disinformation. That’s what Trolls do!

How do we not feed them?

We must first recognize them, then “out” them as the troublemakers they are, and finally put them on our Ignore List (not just bloggers but all of us who watch TV or listen to radio), or Report them to the Authorities if they become a serious threat.

Trolls are Information Terrorists, who exist in an organized network of underground cells and whose mission is to derail debates, attack our intelligence, and commit spirit murder.  The collateral damage is that these trolls, as Albert Brooks’ character once said in the movie Broadcast News, “bit by little bit lower our standards.”

In the face of injustice, our social media has shown that, with enough organized effort, the millennial generation can in fact change the world.

The Supreme Court, who supported Citizens United, and the institutions of power, which fund Super PACS, know this.  This is why social media is even more significant and why those in power will derail the efforts of grassroots organizing by aggressively recruiting Trolls to destroy our free information society.

Let us arm the millennial generation (and JOURNALISTS!) – who are ever immersed in this information overload – with tools of discernment.  With such necessary weapons at their disposal, they will more effectively and shrewdly starve out the trolls.