← Brave is David Archuleta!
Where is the Love? →

If David Had Played the Game 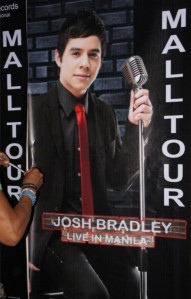 Thanks to a link to a funny spoof on the Nandito Ako script leak (or not really as the case may be), we get some lovely pics (image on left) and great funny imaginings of David and his imagined plot line over in Manila.

We need to just call the whole thing

THILLER IN MANILA: THE SEQUEL! 😛

On a more serious note, is it just me or is David looking so, soooooooo relaxed and extremely comfortable in his own skin? Maybe that’s part of his own maturing process, but I do wonder how much of it is related to:

3. just being away. Full Stop.

He’s goofing around, feeling comfortable enough in a love story (this from a guy who didn’t feel comfortable singing about love, mind you) and just having a good time.

I see David over in Manila, and I’m actually relieved that he didn’t land in the clutches of a major label who would have him completely transformed.

Take the case of Lana Del Rey. I don’t know if you’ve been paying attention to the latest “rising star,” but Lana Del Rey (real name Lizzy Grant) has courted controversy when she received negative reviews for her recent performance this month on Saturday Night Live:

The latest creation from Interscope Records, I have to say that what disturbs me the most about this performance is her complete lack of joy.  Nothing can take that sheer joy and pleasure in singing that David exhibits so effortlessly.  Other folks are up in arms because they believed Lana Del Rey was an “organic” star who built a fanbase online with her own “self-made” videos uploaded on You Tube.

It never ceases to amaze me how people still get duped at these obvious “plants” from big studios (remember the “organic” discovery of Greyson Chance on You Tube that the likes of Ellen Degeneres had made, and remember how I exposed it for the stealth video that I thought it was?). Nothing in the above video looks “home made.” It looks like what a professional attempt at “home made,” vintage 60s grainy image and all, would look like.  I mean, c’mon already!

Ever since Island Records “planted” the You Tube “discovery” of Justin Bieber, I’ve been rolling my eyes at the latest You Tube sensations. And please note that all these “organic” discoveries of the latest music artist on You Tube happened AFTER big business got its hands on You Tube and started planting all their commercials all over the site – I do not doubt for a minute that they even rig the number of views certain videos get just to create the necessary buzz around their studio plants.

This is the current climate of American pop music, and I think it’s sad that for any pop artist to get any real opportunities, they have to basically lie about their musical origins just to follow a studio script about these sudden “finds” and “rags to riches” success story (Lana Del Rey apparently comes from a very wealthy family).  All this hoopla is occurring before her album drops on January 31, mind you.

But these kinds of ridiculous music concoctions (i.e. I don’t deny Lizzy Grant has talent, but this completely manufactured Lana Del Rey as some kind of “throwback” personality to “real music” is beyond silly) remind me of something. If David’s label had wanted to market David for pop star success, they could have and would have. The question remains: was it the label who dropped the ball, or did David just not want to “play the game”?

If David didn’t want to play the game, that’s understandable. He prizes authenticity and sincerity above anything else.  But if his label didn’t want to bother, what were the politics behind this choice? I said it before, and I’ll say it again: before Island gave us Justin Bieber, Jive had David Archuleta. They could have banked on David with the whole “bubblegum teen pop” thing and didn’t. When did that spectacular breakdown occur?

At the end of the day, I still say it’s for the best. I don’t think David wanted to get stuck with that image, which would be so much harder to grow out of. And sometimes I still think Jive had an idea to “grow” their artist, but due to their financial and political woes, just didn’t.

If taking a “vacation” in Manila allows David to grow in his own way, at least he can emerge into a different kind of artist: one who didn’t have to sacrifice his soul to play the game. And one who didn’t have to embarrass himself on SNL, exposed to the world as a studio plant with not one shred of authentic bone to his body.