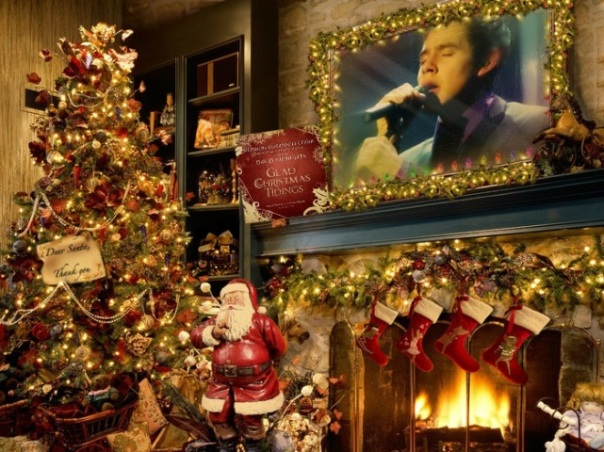 And it’s been a joy to witness other fans’ experience of  David during this tour, which continues through next week.  What a joy to see David on TV again when he was featured with the Mormon Tabernacle Choir on PBS earlier this week.

David, to me, is becoming synonymous with Christmas, and I swear I can’t tolerate any other versions of “Silent Night,” “O Holy Night,” “The Christmas Song,” “This Christmas,” “Have Yourself a Merry Little Christmas,” and now “The Little Drummer Boy” if The Voice isn’t singing it.

Next week, my family and I are going to participate in a Handel’s Messiah sing-a-long, and I’m already thinking through the deep spiritual meanings, thanks to The Voice’s interpretation on other Christmas carols.  I took some time this week to write to David about what his Voice means to me,  as a devoted fan following him these past three years.

David means warmth, peace, love, and music to me.  And whenever I’m down, I think about him and feel the holiday.  And if I feel this deeply about The Voice, in the wake of witnessing him live for his “My Kind of Christmas” tour, do others feel what I feel?

Are we devoted fans deluding ourselves into thinking The Voice IS THE VOICE, or will others experience what we’re experiencing?

And how, after listening to some really dreadful current Christmas songs – often heard while shopping in the mall – can anyone NOT hear the real deal that is David Archuleta when he raises his Voice in song this Christmas season?

At the very least, we here at Soul David have increasing optimism that David is going places (according to my latest poll, we’re convinced David will tour every Christmas), and it couldn’t just be because The Voice takes us to those magical places.

I’m keeping the faith and maintaining hope. This Christmas season, there really is no other way to feel.  At least with David, we always “feel” what he’s feeling because he, more than any other music artist out there, knows that music takes us where the musican wants us to go.