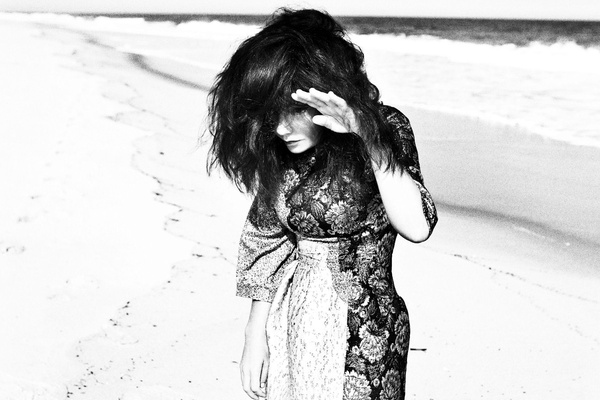 So while our favorite pop star takes a “break” (if you can call staying up all night working on music and planning for international tours a “break”), interviews songwriters and producers, flies back and forth between Nashville, L.A., and Utah (who is backing this venture?), and while the music industry sinks further and further deep into a cesspool, certain music veterans are looking for cool new ways to redefine music and blow our minds.

I’m referring to Icelandic songstress Bjork, who is embarking on a truly multimedia, digitized music project that begins June 27 in Manchester, England.

Bjork. ‘Member her?  (Those of you who came of age or paid attention to ’90s music might, others might simply remember her as making David’s favorite music videos list with her “It’s Oh So Quiet”):

Bjork has been hit or miss for me.  Like I absolutely adore her “Joga” song and video.  Even back then, she and director Michel Gondry (Eternal Sunshine of the Spotless Mind – one of my absolute favorite movies – and The Science of Sleep – one of my least favorite movies EVER! Another hit or miss person for me) found some creative mind-blowing gorgeously lush visuals that mix nature, technology, and music, something that appeals to the electronica musician that Bjork represents. It’s just so beautiful to me!

On the other hand, I loathe, loathe, LOATHE her completely abstract and much too cerebral approach to live artistic creation of “music,” as reflected in her “Declare Independence”:

I mean, I totally respect Bjork’s artistic vision, political declarations, and her attempts at highlighting the discordant sounds and chaotic tunes that can come about in an eclectic mix of odd instruments. It just left me empty, the way a Picasso painting often does for me. As in: I respect the modernists, but give me an impressionist like Monet any day.

At the same time, when I shake my head at the state of music today and see how the industry is still pushing a simplistic memo that digital technology is the cause of their demise, I gotta tip my hat to music artists like Bjork who not only is not afraid of technology but is willing to push the envelope and bend it to the will of art (music in this case).

So, her plans this year include releasing a new album titled Biophilia, which will also come in different media forms:

1. a traditional album (including vinyl LP)

2. a live show at the Manchester International Festival, which is part of her three-week residency there.  She will be premiering some newly crafted musical instruments that are hybrid computers and traditional forms, like this gameleste for example:

… or how about a 30-foot pendulum that “harnesses the earth’s gravitational pull to create musical patterns”?  Sometimes Bjork is too deep for me!

3. an iPad App Album – that’s right: each track on the new album will come with its own app that gives the listener an opportunity to interact with the music in a personal way.

4. an IMAX 3-D Scientific Musical (again, directed by Gondry), which will accompany the album. (Wonder where this is going to be shown?)

Oh yeah: the theme of the album, “Biophilia,” is all about love for all living organisms and how interconnected we are – from the atoms to the grand universe.  So, one track, “Virus,” will feature an app showing how a virus makes contact with a cell, with the music presenting it as a “love story.” (Bjork, Bjork, Bjork – sometimes you’re awesome in all your weirdness!)

She has another preview track called “Solar System” (I imagine having to do with the sun and the planets? Can’t wait for the digital imagery!)

What I will say about Bjork: she has such a deep respect for the soundscape of all that is life, and how nature is captured in music (and vice versa). And how technology can bend to the whims of the musical (and not the other way around).  Hmmm, I wonder what she thinks of autotune?

After all, this is someone who metaphorically represented Vocal Power in this way:

Sometimes I wonder what an electronica musician like Bjork would do with a Voice like David’s.  Imagine the musical possibilities!

Whatever one may think of Bjork – because Biophilia sounds like it could be her musical opus (and evidence of her genius) or a resounding disaster – I will give her props for keeping music alive in whatever new forms it could exist.