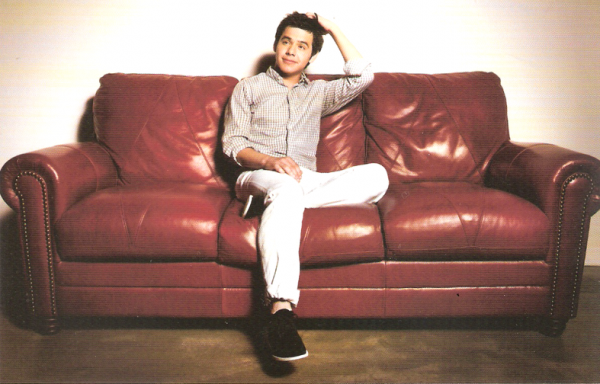 He’s like the “entire package” – an oft-repeated criticism from American Idol judges meant to convey that someone’s star potential is measured by looks and talent. With David, we get talent, looks, and character. Which is something more than just having a winsome personality.

I bring this up because I’ve been amazed at the way David conducts his Twitter life. What he chooses to share with us,  his fans, is oh-so-selective, both in terms of his personal life and his professional life.  For someone growing up in the millennial generation, a generation known for not knowing how to distinguish between the public and the private, I deeply admire this about him.

He knows just the right kind of info to share on twitter – from the stupendously awesome (flying on the Good Year blimp) to the incredibly banal (shopping at Walmart on a Saturday afternoon – really?).  Meanwhile, somewhere between those two events is an unspoken big deal: I’m sure it’s about the music biz, whether working on a new contract with a new label or ironing out some kinks in new music. Who knows?

What I do know is that David left the comfort of home in Utah to make this trip to California, and I do not believe it’s not musically related. What is fascinating to me is the way David is keeping the lid on things, even though he must have some inkling about the anxiety felt among his fans about his music career.

It’s things like these that really make me admire the Man – he is truly committed to being decent and to protecting information that could change things considerably if leaked too early.

Following David’s twitter is very much a lesson in reading between the tweets. I think the guy is coy and flirtatious myself.

It’s one of the cool things about being a David fan, and as much as he’s a “new Voice” for the millennial age, he’s also an “old soul” following the old-school rules of ethics and integrity.