Being 20: Spotlight on Stevie Wonder 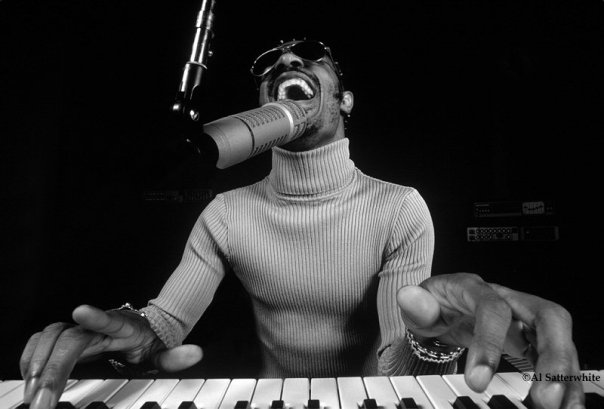 It was very telling to me when David, during Beatles week, chose to do a Stevie Wonder version of the Beatles’ song, “We Can Work It Out.”  He’s a soul man through and through! (That’s why I knew, when Jive tried to turn him into teen pop, that they wouldn’t know soul if it hit them in the face.)  Stevie Wonder is also hard to cover, if you’re not going to do a ballad, and David was bold to take on this song, so this choice also revealed to me his courage very early in the competition.

And David did so in a high-pressured environment when Stevie is hard on a good day!

When I say Stevie is hard, I’m actually referring to his complicated musical notes, which are all over the piano keyboard.  When I was playing piano and “graduated” from Bach, Beethoven, and Mozart, to finally being able to tell my piano teacher that I wanted to play more “modern” songs, he asked me what I wanted to play, and I said: “Stevie Wonder”!

Good Jesus, Lord!  Whatever made me think I could do Stevie, after doing Mozart?  I’m telling you: all the B-flats and D-sharps were cuh-razy!  It took me an entire season to master “You Are the Sunshine of My Life.” And if it’s hard to do Stevie on piano, whatever could you do on vocals?  So, David – despite flubbing the lyrics and making a mess of “We Can Work it Out” (see, the Beatles’ version wasn’t that hard) – earned my mad respect.  And, of course, reading in Chords of Strength how Stevie Wonder is one of David’s idols, I’m dying to hear David do a proper cover of any number of Stevie Wonder’s hits (he already gave us “I Just Called to Say I Loved You” on a ring tone – haha!). How about “Lately,” or “Ribbon in the Sky,” or “I Believe,” or “You and I” or “Higher Ground” or “As,” the last track being the best Stevie Wonder song ever, IMHO?

What else is there to say but that Stevie Wonder, who at an early age was playing piano, harmonica, bass drums, and guitar, is a musical genius? What magic could exist with the music of a musical genius married to The Voice?  Not to mention that Stevie, like David, gets how music is indeed a spiritual portal connecting the divine to us mere mortals.

So, what was Stevie up to when he was David’s age? Well, Stevie started early in the music business, getting signed to Motown records as a child act when he was 11, known as “Little Stevie Wonder.”  During his teen years, he had a few hits, like “Signed, Sealed, Delivered” and “For Once in My Life,” and a few flops, but Stevie definitely felt stifled on the label, reduced mostly to just doing “bubblegum soul” to the more mature sound the other acts were doing.

By the time he was 20, Stevie married Syreeta White, a secretary at the label and songwriter, and they ventured to work on an album a year later, Where I’m Coming From, which failed to chart.  Stevie also did the instrumentals on The Spinners’ now classic 1970 R&B song, “It’s a Shame,” hoping to showcase his creative talents to his label.  Of course, being that I’m of the hip-hop generation, it was rapper Monie Love, who introduced me to this track – haha! I still marvel that Stevie did all the instrumentals on this immortal baby when he was 20 years old!! A real showcase indeed! Of course, the work that he did, not just providing instrumentals but also songwriting, enabled Stevie to renegotiate his contract, which reportedly was 120 pages long and stipulated that he have more creative control over his music and be entitled to a larger percentage of royalties.

There definitely seems to be a theme somewhere in this “Being 20” series.  The age 20 seems to be the “transition” period, where an artist has an epiphany: either he is itching to change musical directions (like MJ, like Stevie) or he/she is ready to enter into the professional realm of music (like Elton, like John, like Eva).  Either way, these artists constantly prove that their musical lives are really just beginning at such a tender age.

Seems to me like David is in good company.

Posted in Being 20 Series, David's influences