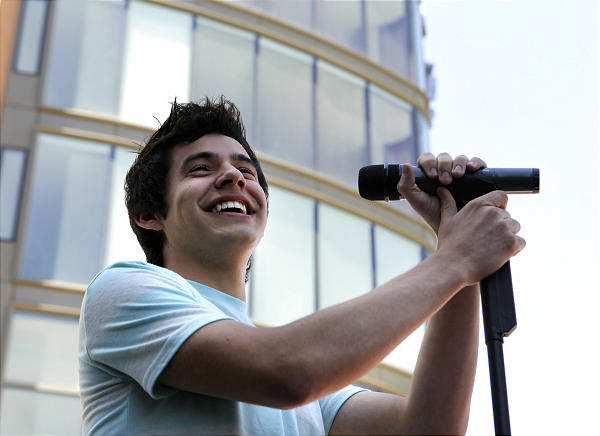 Maybe it’s because I had a recent birthday not that long ago, but I’m starting to feel “old.”

Or, let me put it this way: I’m of a certain age where I’m too “old” to be a “babe,” let alone a “tween.”  But I’m still “too young” to be a “cougar.”  A term I absolutely loathe with a passion (and equally loathe “tweens,” which is a made-up word that wasn’t around when I was a “tween,” and I especially despise “babe”).

And don’t even get me started on the whole “Frauen” crap!

There are all these terms being tossed about to demean and degrade women, and I’m of an age where I’m “too young” to not give a damn anymore but “too old” to let it slide.

It all started last week with David’s book tour, and I happened upon an interesting twitpic showcasing the crowds showing up for him. Great stuff! And then to see Rickey, of all people, turn away from the Borders bookstore in NYC because it was “too crowded” and he didn’t feel like fighting with “adults” who keep pushing the “wee ones” out the way to get to David, a narrative that I think VFTW and others also use to make fun of the “older set” (usually imagined to be “cougars and frauen”), all of this just made me feel funny.  I had a conflict that prevented me from seeing David when he was in New York, a rather “adult” obligation to be frank (a conference I had been planning almost a year to attend), and the thought that I might have gone to one of these events, had I had the time, only to have someone be “annoyed” that I was even showing up for a “kids’ event” (because the main attraction happens to be David), well, that just irritates me like nobody’s business!

At the same time, I realize I’m in a different kind of mood concerning David. Don’t get me wrong: I can still drool and gush over a beautifully lit photo of our beloved like the best of them.  It’s just that…well… I want to talk more about David the artist now.

Do you realize that David penned a 200+ page book about himself, hoping that we, his fans, will finally take his artistry seriously?  I want to take my David love and admiration as seriously as he takes our devotion.  When I offer a critical book review of Chords of Strength, I’m not championing “puppies and ice cream.” I’m carefully nuancing what David wants to share with us and how we greet that information.  But I also want to find other fans who want to talk honestly and critically and lovingly about him too.

I guess I just want to prove that, as a woman, no matter what age we’re at, our “fanaticism” isn’t just about some irrational love for a cute face.  Our love and appreciation for David is far deeper than that. So I’d like to think.  (Oh, and gentlemen, please chime in.)