While awaiting the latest vids and pics from Atlantic City, feast your eyes on this! (got this lovely from TDC): 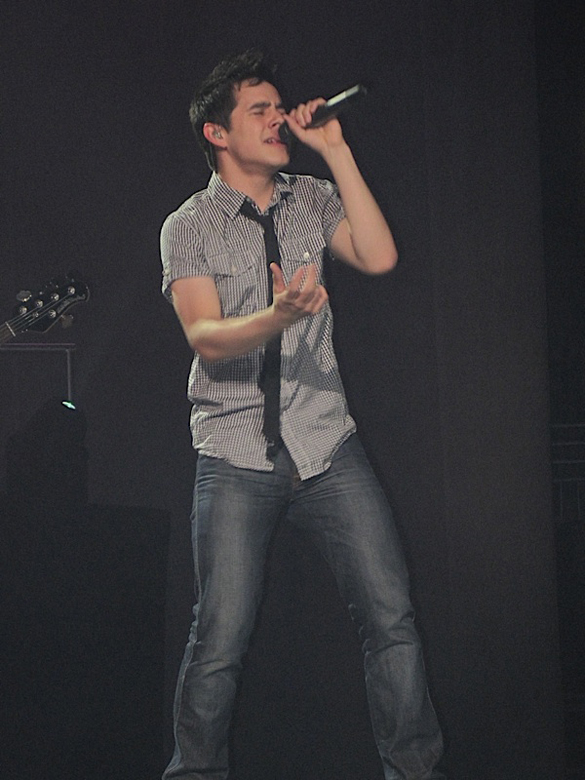 Coulda, Shoulda, Woulda, and a Whole Lot of L.O.V.E.

You know you’re a mega ODD fan when you spend your Halloween evening with friends, dinner, and a movie, and after that movie is over, you think, “I hope David gets to see this!” haha!

That was my reaction to the This is It! documentary featuring rehearsal footage of Michael Jackson’s final concert.  As an MJ fan, I’m glad I decided to go see this film, despite reservations about AEG/SONY attempting to capitalize on his death (or recoup their losses – depends on how you look at it).  It really does provide closure of sorts, although I left the movie in tears thinking, “That would have been one helluva show!”

Not your regular concert movie, or even a behind-the-scenes movie, you definitely get a feel for Michael Jackson the performer, the artist, the entertainer.  Very much the gentle ringmaster of a three-ring circus, Michael Jackson rules his crew with a velvet-gloved iron fist – he knows what he wants, how he wants it, and he’ll get it done… with gentle persuasion of course.  For example, a guitarist is stringing out a tune of one of MJ’s popular hits, and it’s not “quite there.”  The guitarist assures him: “We’ll get it there,” and MJ, all softness and passive-aggressive charm, insists: “Well, get it there.”

No prima donna hissy fits, no dictatorial shouting battles, just gentle assertions.  I imagine this is how people, who’ve been raised by the strictest and most abusive parents and who make a conscious decision to not emulate that style of authoritarian behavior, learn to take charge and learn to get what they want.  Behind every insistence, behind every charge, Michael Jackson follows up with: “It’s all about love.  Do it with love.  L.O.V.E.”

What I really like about this film is that the director, Kenny Ortega, was careful in not revealing too much of the legendary figure.  We don’t get too many closeups – MJ would have been very sensitive of his shaded visage. Instead we get full-figure shots of the dancer and his magic feet at work.  We don’t get a “circus freak” but a “control freak” hard at work, revealing his perfectionism and work ethic.  In order to “razzle dazzle” the crowd, you must first put in the labor and the time.  The integration of digital effects and cinema give us some fantastic productions – like the Hollywood-inspired “Smooth Criminal” or the newly enhanced graveyard sequence of “Thriller,” or the Soviet military spectacle of “They Don’t Really Care About Us.”

But, it’s the less showy, pyrotechnic-enhanced numbers that really pull at your heart strings.  During the Jackson 5 era segment, I almost teared up at “I’ll Be There,” or how about when it’s just Michael and the music, and he’s singing “Human Nature,” and his falsetto (which is not spectacular since he’s “saving his voice” for the actual live performances) just cries out.  “Oh Why-oh-Why….” and I’m thinking, “Yes, Michael, why did we do you that way?”

And it’s not until the final number, “Man in the Mirror,” that I really start crying at the end, because you know this is where the movie comes to an end, and also knowing that this tour never was.  It’s quite heartbreaking.

I understand, having read different reviews and comments, that there was a lovely surprise at the end of the closing credits, and believe me, I wanted to stay and see the whole thing, but the movie ushers already came into the theater patiently (or not) waiting for the last of us to leave the theater.  Because of those workers, I missed that surprise.  Dang it! So, you know that means I have to go see it another time.  Sigh.

What does annoy me though are those critics who watch this film and lament that there will never be another like Michael Jackson and that there is no new talent that could take his place.

While I agree that there will never be another Michael Jackson, I disagree that there isn’t a new artist who could rise to his level of talent, perfectionism, and artistry.  Obviously, certain critics are not paying attention to David Archuleta.

Not that I think David wants the level of MJ’s success or even should aspire to that level, but don’t tell me that David isn’t the same type of artist who could orchestrate an entire crew and rehearse for the masses who love him with the same L.O.V.E.

I believe they are both inspired by the same musical muse.  And, in my heart, I believe one star has died to make room for a new one.

In other words, unlike the majority of critics out there, I do not lament the lack of talent out there.  David has what it takes to fill the void Michael Jackson has left.