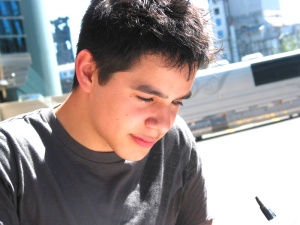 At least David’s feeling better enough to blog (heh – I love how he thinks Martina McBride’s “Independence Day” is appropriate for the 4th of July, but bless his heart for suggesting Michael Jackson’s “Man in the Mirror” – what I would give to hear him do a rendition!):

So I was planning on doing a video blog for this week, but I haven’t been feeling too well at all for the last couple of days. So I while I was planning on the video blog, I wasn’t planning on getting sick lol. So I’ll just have to figure out when the next time for a video blog will work. I’m already feeling a whole lot better than yesterday though! We had our drive from Oklahoma to Arizona that day. I spent 24 hours on our bus, because even though we finally got to the hotel I was feeling too sick to move lol. But things are well! I’ve been sleeping, resting, sleeping and resting like crazy. Thanks for all of your concerns and thoughts! I’ve really appreciated it. I’m hoping to be in good shape for all of you coming to the Arizona show tomorrow!

While I slept for most of the day yesterday, I did plop myself in the back lounge of the bus to watch the Michael Jackson Memorial. I was really touched by all the performances and the things that were said by his friends that spoke. It was a really emotional memorial. It really got me when his daughter spoke at the end, and my thoughts and prayers go out to them! I hope we can all keep them in our prayers, and give them the space and respect they deserve and need right now. Their dad went through a lot, but he did his best to keep his kids away from all that craziness because he cared about them and knew what it did to people. But despite all the things that Michael dealt with and everyone looking down on him, now that he’s gone it’s amazing to see how everyone has remembered all the things he’s done in his life that have influenced so many people. The way he’s reached out to sooo many that were in need and in poverty, and then in the way he touched people with his music. All I can say is thanks to him, not only for how inspiring he was to me basically throughout my entire life lol, but for his contributions to music and to the world.

All right, this last weekend was 4th of July weekend! The birthday of the U.S.A.! We were in Texas for the weekend, and we got the day off for the 4th in Dallas! I have an aunt who lives in Dallas, so I got to spend the day with her. We ate Thai food for lunch (hahaha) and went to see the movie Ice Age 3D. After that, we watched fireworks. I remember where I was last year for the 4th of July. We were in Las Vegas during the Idol tour, and I watched the Mandalay Bay fireworks from the hotel room. It was really cool because you could see the fireworks from above. My aunt also made me a traditional dish that I haven’t had for a long time called.. Ebleskiver? I’m not sure how to spell it but that’s how it sounds haha. It’s a Danish thing since my great-grandma on that side of the family was fully Danish, so just keepin’ the tradition alive! They’re really good too! Have any of you ever had them? Let me know if you have, because not very many people that I know know about them.

Well that’s all really for today! If you have any really interesting stories that happened this 4th of July weekend it’d be fun for you to share them! Until next time. Ciao

Song for the day: Man in the Mirror – Michael Jackson
I know this song has been everywhere lately, but thank goodness it is! It is one of the greatest songs, with the most amazing message of starting with the person in the mirror. So take it to heart: If you want to make the world a better place, take a look at yourself and make a change!

another song for the day: Independence Day – Martina McBride
I Know it’s a little behind lol, but it’s to keep the 4th of July spirit!